Settlement of this area began in 1784 with a small group of Revolutionary War veterans and other pioneers who ventured into the newly ceded lands of Franklin County. The first permanent communities were on Sandy Creek at Groaning Rock, Yamacutah (near present-day Commerce), Hurricane Shoals, and in 1786 on the Middle Oconee River near the Tallassee Shoals. The population had swelled to 350 by the time the county was formed by legislative act to February 1796. 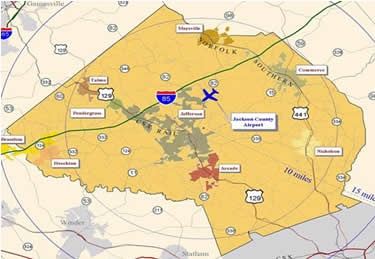 Jackson County experienced steady growth throughout the 19th century, largely due to the railroads that intersected the area. Many towns did not even exist until the tracks were laid and a depot constructed. Of the ten municipalities incorporated by 1920, seven defined their boundaries from the depot. Of these, Harmony Grove became one of the leading distribution centers of northeast Georgia due to the railroad. The town was prospering so well that in 1904, the citizens changed the name to Commerce, "to better reflect the commercial air of a city."

Rail service began for Jackson County in the 1870s with the construction of the Northeast Railroad through Commerce, Nicholson, and Center that lie between Athens, Georgia and the Atlanta-Charlotte, North Carolina. By 1883 the forerunner of the Gainesville Midland line was moving passengers and freight from Jefferson to Gainesville and then to Social Circle and Monroe. These steam-driven locomotives, and passenger services in the county were phased out by 1960. But within a decade, the opening of Interstate 85 signaled an accessibility for new industry and homes.

By 1801, the settlement at Hurricane Shoals included homes, a church, a grist mill, a small iron foundry, and the first school in Jackson County. Records exist for as many as 247 schools in the county's history. Perhaps the most well-known was Jefferson's Martin Institute, begun in 1818 as Jackson County Academy. It was renowned by the quality education it provided students who came not only from nearby areas, but also other states and some foreign countries. Martin Institute was possibly the nation's first privately endowed school, having received a legacy from William Duncan Martin in 1854.

Jackson County can boast of being the home of the University of Georgia, as the site chosen was on county land and classes began before Clarke County was officially created in 1801. Another notable education first was Harmony Grove Female Academy, the first school for girls chartered in the state in 1824.

Poultry production in Georgia began in 1924 when M. E Murphy of Talmo started growing broilers on a large scale basis. Jackson Countians have moved to the forefront in this enterprise, continually ranking in the top five counties in broiler and egg production. The county also ranks near the top in beef cattle numbers and livestock income in the state. Georgia's oldest registered Angus cattle herd was begun in the 1930s by Jackson Countian Jimmy Johnson and the state's largest sheep herd is currently being raised here by Hilton Black.

Among the many county residents who have made a substantial contribution to state government, three names stand out: Dr. Lamartine C. Hardman, John N. Holder, and Lauren "Bubba" McDonald.

Dr. Lamartine C. Hardman of Commerce, who began the area's first clinic in 1899, served as Governor for two terms from 1927 to 1931. To win the office Hardman defeated another prominent Jackson County citizen, John N Holder of Jefferson. Twice Speaker of the Georgia House of Representatives and for many years chairman of the State Highway Board, Holder was also editor and publisher of The Jackson Herald for almost 70 years.

Bubba McDonald is presently Public Service Commissioner, having been appointed by Governor Zell Miller to fill a vacant commission seat in June 1998, and later that year was elected by an overwhelming majority of voters to serve as commissioner. A graduate of Commerce High School and the University of Georgia, Bubba served 20 years in the Georgia legislature representing parts of Barrow and Banks counties and all of Jackson County.

Contact our Historical Society through Email or visit the County Archives located inside the Jackson County Historic Courthouse.